Magic OZ is a full time School Shows magician who travels around Southern England. You will love his performance and so will all who attend – Guaranteed.

He has the skills to entertain both the children and the parents for a fun packed show, he can act as MC for your Fetes or can get those extra funds your require for your school.
Magic OZ perform’s not only for the children but the adults too. and is idea to use at any School Magic Show or School Fete or if you need to boost your funds.

We have used Magic OZ from day one for all of our events and cannot recommend him highly enough.

He performs a very funny magic show that was suited for all who attended, walks around and entertained throughout the day. 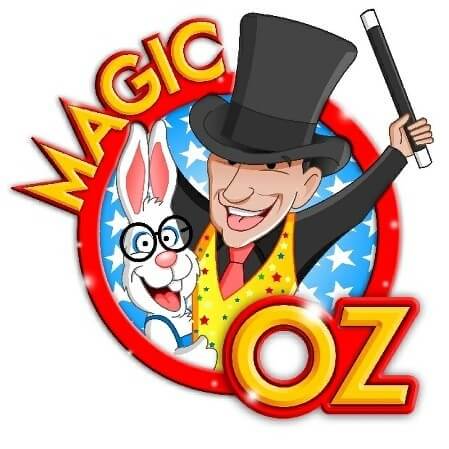 Thank you very much for the wonderful entertainment you supplied. The Children had a great time and we have never had so many positive comments from mum’s and dads before.
You amused us all and I have not seen so many people laugh so much before, you where great thank you again

I just wanted to thank you for a fantastic show yesterday with your amazing Stage Show.

With over 350 adults and 250 children to entertain on one of the hottest days so far this year meant you didn’t have an easy ride, but you made it look so easy, and everyone had such a great time, well done you made our event.

Magic OZ is experienced in organizing parties, school shows and fun day events and this has helped him in creating the best type of magic for children. This usually includes greeting the children first (crucial step for small children), dancing and playing music and having fun, and performing magic tricks. Also while the birthday boy or girl cuts the cake he entertains the adults too. The cake is cut; he organizes the second part of the show, where he involves the Children again. The party ends with Magic OZ giving a balloon to every child with music, Of course, depending on the type of party being held and age of the guests, Magic OZ modifies this shows to suit every occasion.

Magic OZ is one of the most popular and sought after Schools Shows magician around today. He offers his comedy magical services as a table magician and birthday party magician at family private parties, lounges, restaurants and private venues.

He also entertains children at schools shows, school fundraising events and is know as the favorite Schools Shows magician. Though he is based locally, he organizes parties and fund raising events at schools in Surrey, London, Kent, Middlesex, Hampshire, Sussex, and all venues throughout southern England and covers the UK.

For children between 3-4 years, he organizes School shows that include lots of foot tapping music, dance and intriguing puppets, and balloons animals.
For children between 5-7 years, he uses clean comedy and humor to make the best School Shows guaranteed. Magic, Music and dance are also part of his fun pact magic show.
For children between 8-15 years, he offers an enriching but entertaining magical experience. It usually includes close up magic and comedy that educate the School Pupils about magic.
For guests between 16-103 years, Magic OZ performs a variety of services to include strolling magic, comedy cabaret shows and also arranges for full school stage shows.

As a member of the renowned and famous Magic Circle, Magic OZ possesses the expertise to entertain a varied age group that includes children from 3-15 years and adults from 16-103 years. He modifies his Schools Show, depending on the average age of the attendees and always designs and makes his magic suit the School to make it the best around Southern England every time.

The top Schools Shows magician you can find.
GUARANTEED
Don’t just have a School Children’s Show… have the best Show ever!.
CALL MAGIC OZ TO MAKE YOUR SPECIAL CHILDREN’S
SCHOOL MAGIC SHOW TO BE REMEMBERED
Tel: 07974 357 911